Posted by Jack Holland at 11:30 PM No comments: 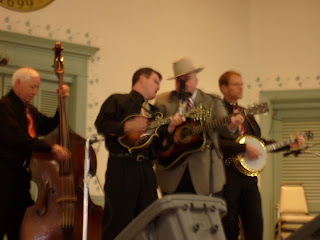 David Peterson and 1946
Now here’s a dynamic band. I saw them in Canterbury CT. earlier this year. They opened with a hard driving fiddle tune that was crisp and tight and had the audience on there feet and ready to hear more. Lead singer and guitarist David Peterson has a powerful and pure voice that is a joy to hear. Couple that with the beautiful harmony of Mandolinist Mickey Bolles and some really hot pickin you’ve got to have a good time. Many of the songs they did were written by David and that to me is much more enjoyable than hearing the same tunes that you hear over and over, band after band. Of course if you’re new to BG then it’s wonderful to hear the traditional music but as we know most concerts are populated by the "Believers" who’ve been with the music forever. I think it’s good for BG to hear new ideas and themes. At any rate, if you can get to see David and his fine band do it , You won’t regret it.
On another note
I allways respond to the question "do you play an instrument" with the answer "yes, I don’t play well but I play often." I said this to a professional bluegrasser and he quickly replied, "if you play often you’ll play well." So I slog on hoping to prove him right. It seems you continue to play at the same level for a long time and just when you’re ready to put the giutar on E-Bay, WHAM, you nail that lick or finally play a tune the way it should be played (not well enough to cause you to jump into a jam with Chris Eldridge et.al.) And you seem to get recharged and are able to see better pickin just over the horizon.
Note : There’s a new site where you can upload your BG music video or listen to and watch some good amatuers and pro’s. It’s http://www.pickin-n-grinnin.com/
Posted by Jack Holland at 3:49 PM No comments:

I don't care what your age is, if you sit down and listen to a good bluegrass band you'll find your feet get to tapping. Even young people who've never heard the music before will without fail begin to tap, tap, tap.
That's why it puzzles me that this music I love seems to draw only middle age or older folks to concerts. With the newer bands playing edgy progressive music you'd think they would draw some young people to there shows, but no, you wont find them. Maybe we need some Brittany types up front.
l
Posted by Jack Holland at 8:36 PM No comments:

Wondering if anyone has signed up for the IBMA World of Bluegrass Tour scheduled for October 1-9, 2007. It's promoted by KCI Travel out of Coventry, CT.
Sounds like it could be a lot of fun what with 25 pickers with room on the bus for jamming. The schedule calls for side trips to Bill Monroe's homeplace and gravesite in Rosine,KY, dinner at the World Famous Moonlit Bar-B-Q Buffet at Owensboro, KY. as well as admission to IBMA's Fan Fest and the BLUEGRASS MUSEUM. www.travelwithkci.com
Posted by Jack Holland at 8:47 PM No comments: