The Country Corner Coffeehouse in South Hadley, MA will feature the Spinney Brothers in concert this Saturday evening, March 31 at 8:00 PM. The Spinneys have released a new album, "Memories," that is doing quite well on the bluegrass radio charts and are touring heavily on the national circuit. The band consists of brothers Allen, guitar and vocals, and Rick, banjo and vocals. They're joined by Gary Dalrymple on mandolin and Darryl Hebb on bass. This is sure to be a good show so come on out. Note: I'll post a review and lots of pics by Monday evening the 2nd. of April 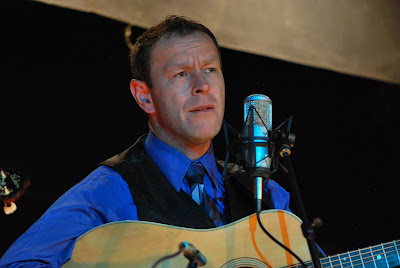 Posted by Jack Holland at 4:58 PM No comments:

The BearBridge Band will be appearing at the Firebox Restaurant in Hartford CT this Sunday the 25th. of March at 5 PM. This band is made up of long time bluegrass musicians steeped in traditional bluegrass and old time music and always provide a fun time. You will hear some original music in the mix and some fine soloing to boot. The band is fronted by Robert Fraker on mandolin and vocals, his wife Lillian on bass and vocals, long time members, Tex Orlomoski, vocals and guitar and Dave Shaw, vocals and banjo. Always a treat to hear this band. The Firebox Restaurant is located at 539 Broad St., Hartford, CT and is well known for its excellent food and its penchant for "fresh and local" meat, produce and fruit. 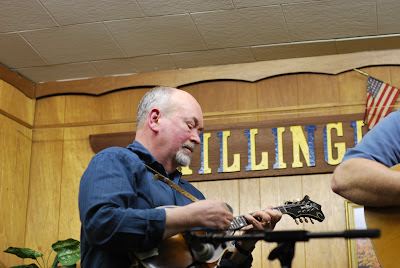 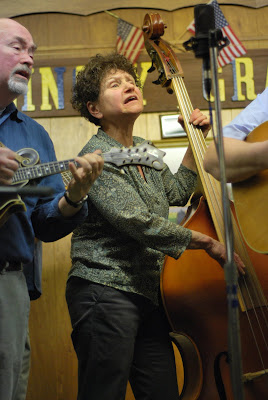 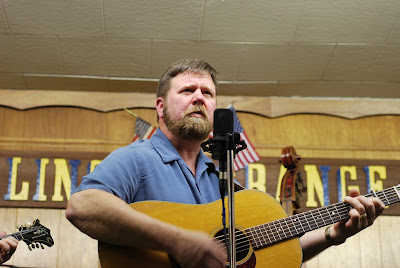 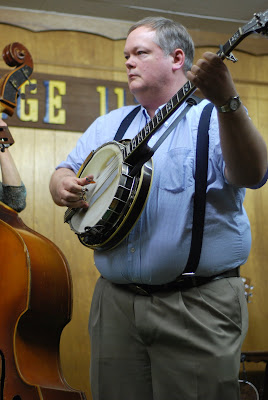 Posted by Jack Holland at 4:08 PM No comments:

The Vanilla Bean Cafe located in Pomfret, CT was turned into an Irish Pub for several hours Saturday night. The band "Cashel Rock" made up of veteran New England artists, Peter Lange, guitar and vocals, Peter's daughter Rachel Lange, vocals, Carol Soucy, vocals and standup comedy, Tim St.Jean, vocals, bodhran, and mandolin, Vikki Baker, vocals, flute and tin-whistle, John Gilmore, bass and vocals, Cathy Day on fiddle and vocals, and Ed Clement, vocals and guitar, had the place jumping with their renditions of Irish drinking songs, ballads, and laments. At times funny as in "Finnegans Wake" and at times sad and nostalgic as in "Wild Mountain Thyme." But most of the night was raucous and fun as these excellent musicians kept the crowd fully engaged. And crowded it was as every bit of space was filled with fans of Irish music from at least three surrounding states, I haven't seen a larger crowd at the Bean. The audience was encouraged to join the fun by singing the chorus on many of the songs and they happily complied. The night ended to soon when after several encores the band had to stop to allow the Bean staff to clean up and close down. Oh well, St. Paddy's Day is only twelve months away.
Note: For full screen images click on the photo. 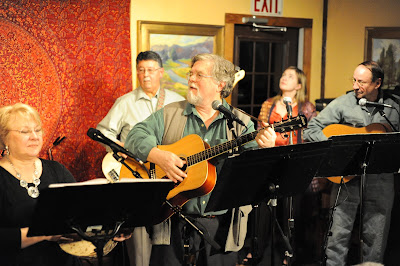 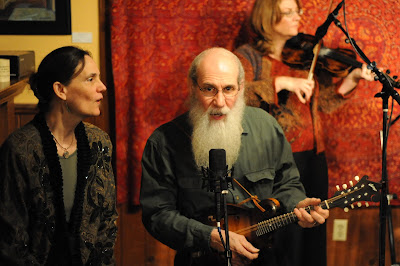 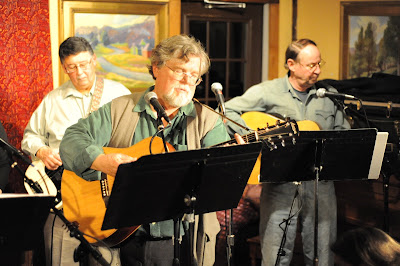 Posted by Jack Holland at 11:05 AM No comments:

The Rhode Island based band Southern Rhode showcased to a nearly full room at the recent Joe Val Festival in Framingham, Mass. The band of veteran bluegrass artists consists of Alex MacLeod singing lead and harmony and playing guitar, Monty McLanahan, lead and harmony vocals and picking the mandolin, Mike Kropp on banjo, and Greg Badigian on fiddle and guitar, with Tom Bowman on bass. Southern Rhode's music ranges from traditional to newgrass with some originals included in the mix. They're very tight musically and the lead vocals shared by Alex and Monty are done with feeling and sincerity, especially Rodney Crowell's "Song for Life," that song really got the audiences attention and brought forth loud applause. The group can be heard at the Wood River Inn in Carolina, R.I. on the fifth Sunday of the month. Hopefully, after the showcase exposure, they will be able to generate more gigs. 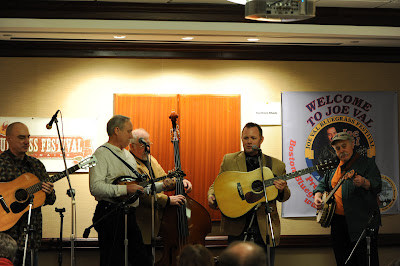 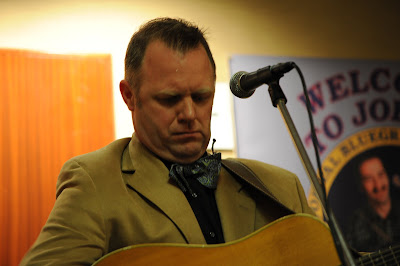 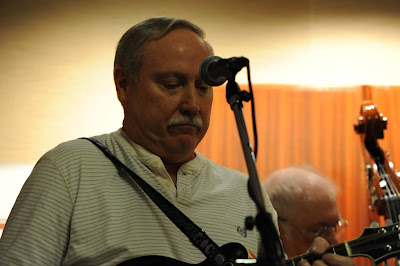 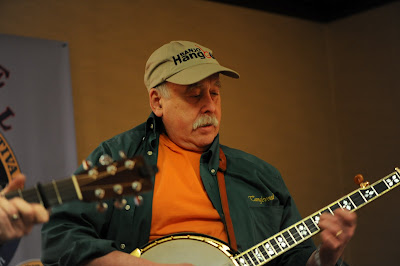 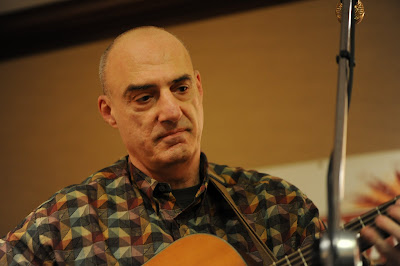 Posted by Jack Holland at 8:14 PM No comments:

Amy Gallatin sings country, swing, and bluegrass and does them all well. She's a veteran of the music scene both in this country and Europe who's very confident performing before audiences of all sizes. The banter comes easy for Amy and she always gets the audience involved. She is joined by Roger Willams, a highly respected resophonic guitarist and his son J.D. Williams on mandolin and Dave Hollender on banjo with Eric Levenson on bass. That's a top flight group in any arena. 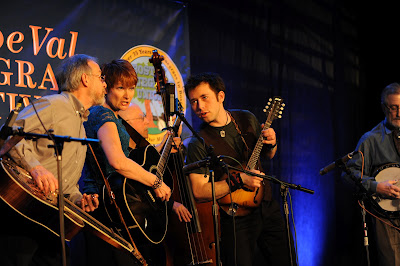 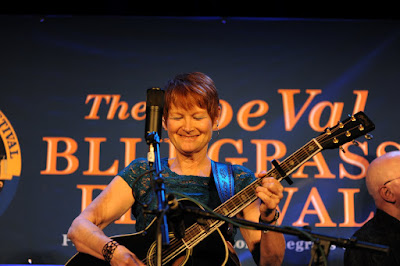 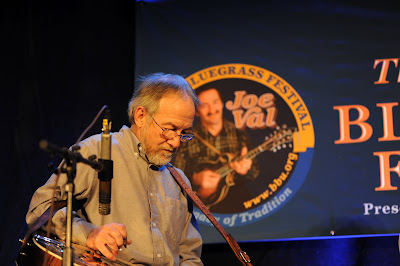 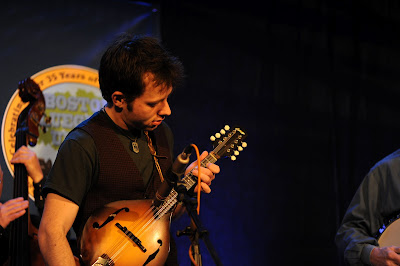 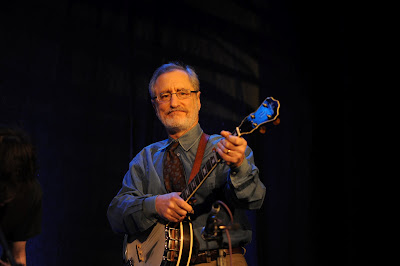 Posted by Jack Holland at 10:21 AM No comments:

The Josh Williams band was a huge hit at this years 27th Joe Val Festival, Josh with his powerful deep resonating voice just wowed the audience as he went through tunes from past albums. People were yelling out requests throughout his performance and he happily obliged them. His singing is as good as his guitar picking which is World Class. He also writes some of the material in his vast repertoire. Randy Barnes, the bassist for the band sings one or two also. What I like about Josh is that he puts a bluegrass sound to material that you don't often hear at bluegrass festivals, songs more likely heard at country or pop venues. He did a spectacular cover of country singer John Conlee's "Rose Colored Glasses" that had the crowd out of their seats. Good Stuff. Josh has talented sidemen in Jason McKendree on banjo and Nick Keen on mandolin. 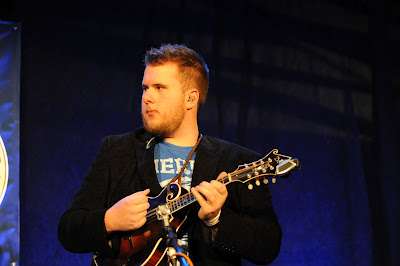 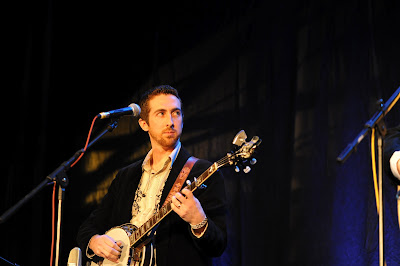 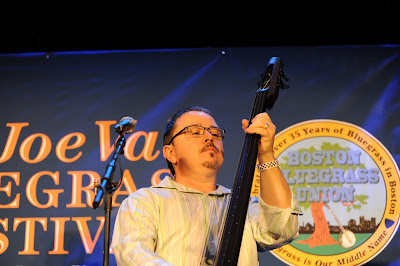 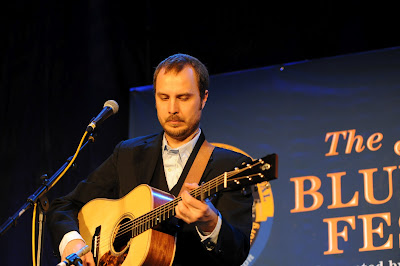 Posted by Jack Holland at 1:20 PM No comments: