The TallGrass Bluegrass Band performed recently at the Grassroots Coffee House, which is located in the Rockdale Congregational Church in Northbridge MA. The group played to a good crowd of folks who may not have been bluegrass fans when they entered the coffee house but after a couple of fast instrumentals and heartfelt vocals they were all tapping their feet and smiling from ear to ear. Nick Anderson who provided most of the lead vocals sang a particularly good rendition of Pete Wernicks, "Just Like You," a tune about the lonely lives many people endure and how loneliness can come to those who least expect it. Nick heads up the Connecticut based Shady Creek Band when not performing with TallGrass. Harmony and "Hot" instrumental breaks provided by members of the "Blackstone Valley Bluegrass Band", Bob Dick on bass, brother Dave Dick on banjo, and the very lively Dan Nowlan on mandolin, made it a special evening of music. The sets were predominately traditional and gospel and during all of the gospel songs the audience sang the chorus parts along with the band without being prompted to do so, that was very moving. Meg and I enjoyed a "first", sitting through an entire bluegrass show in the most comfortable rocking chairs you could imagine while woofing down "whoopie pies" and bottomless cups of coffee. Everyone enjoyed the performance as evidenced by the fellowship afterwards. 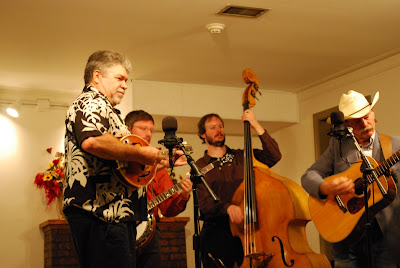 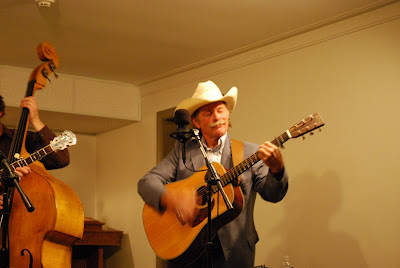 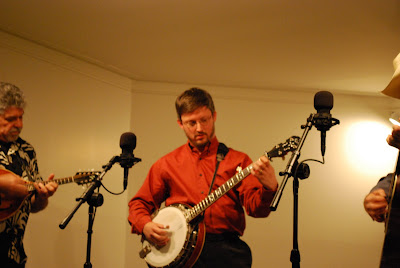 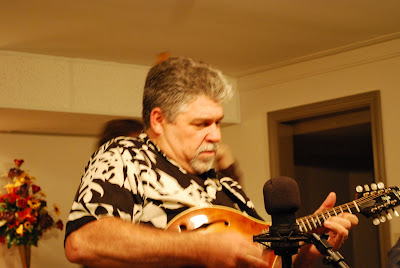 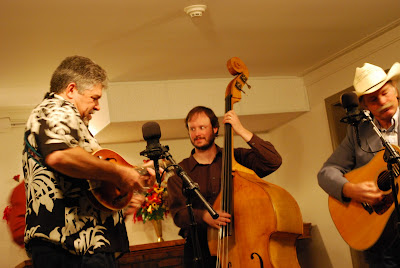 Posted by Jack Holland at 2:05 PM No comments:

The outdoor bluegrass festival season has ended here in the Northeast but if you really need a BG fix you can find a concert here and there, just check the online event listings at the CT.Bluegrass Music Assoc. or the Boston Bluegrass Union and you're sure to find a show somewhere in New England. That's what brought us to the Canterbury CT Old Home Day celebration last weekend. The day was perfect, one of the ten best days of the year, low humidity, clear blue sky and moderate temperatures. The event took place on the town green, surrounded by a dazzling white church with a very tall steeple and colonial period houses on two sides and a one room, 1850 schoolhouse at the top of the green. A stage, set up in front of the schoolhouse was where the Bluegrass band " The Bristol Boys " were performing when we arrived, luckily they did another two sets so we got our fill of the music. Lead vocalists, Dave Orlomoski and Dave Shaw, both wonderful singers, sang traditional tunes such as "Dark Hollow", "Shackles and Chains" and plenty of train songs like "Wreck of the Old 97" and "Wabash Cannonball" and some gospel as well. Dave Aston on bass provided perfect timing to the mix. Vendors of the usual hamburgers and hot dogs, bakery items and homemade chocolates were available and there were colonial craftsmen about the perimeter of the Green. The turnout of local folks and tourists made it an enjoyable day and hopefully raised some funds for the non profits of the town. Note: to view a photo full screen, click on the photo 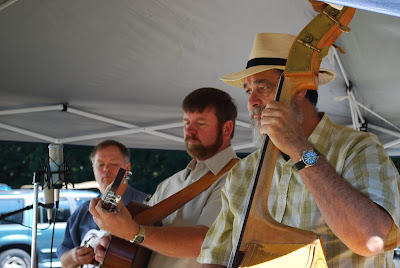 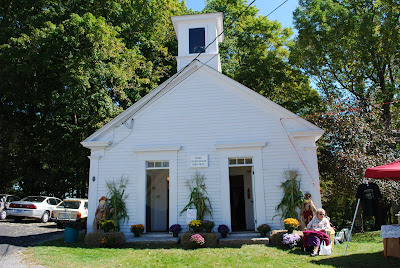 Notice the small size of the woodstove and the length of the stovepipe, I have to guess it was rather cool during the long New England winter 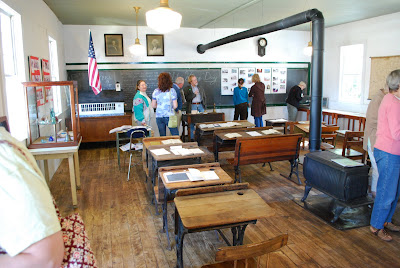 The inside of the schoolhouse was furnished with the actual desks of the period, worn by many hands and showing the names of long ago students carved into the surface 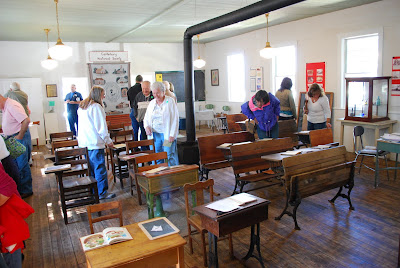 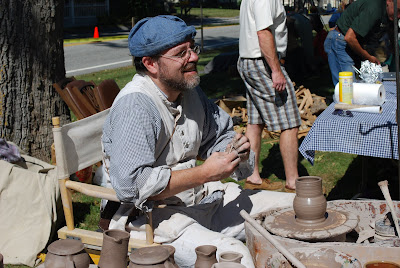 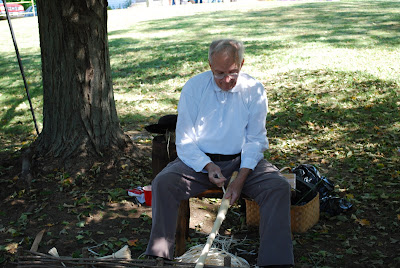 Whittling Spokes for Chair Back

A perfectly clear sky framed this church, similar to those built in colonial times 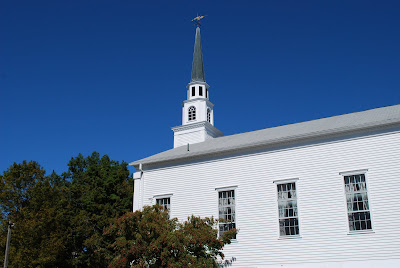 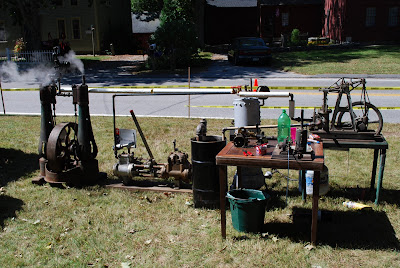 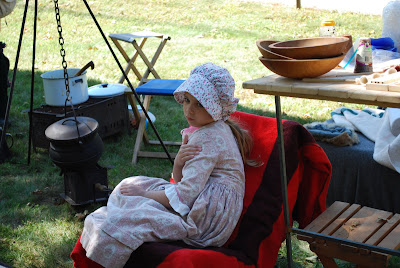 The End of a Long Day

Posted by Jack Holland at 4:10 PM No comments:

Billed as the last outdoor festival of the season in the Northeast the MassBluegrass Jamboree takes place the weekend of Sept 12, 13 and 14, 2008 at the Jellystone Park Campground located in East Wareham, Mass. That's before the Cape Cod traffic gets serious. The campground features many swimming and fishing ponds as well as cranberry bogs on 600 beautiful acres. The promoters have put together a strong lineup of National and Regional bands. Headliners are The Chapmans, Nothin Fancy and Buddy Merriam and Back Roads. The lineup is complimented by some wonderfully talented Regional bands: Southern Rail, Blackstone Valley Bluegrass, Back Eddy Bluegrass, The Falmouth Fiddlers, Monadnock, Stillhouse Jammers, CrabGrass, The Hemingway Brothers, NewFound Grass, Dan Helman and Marking Time, The Crossfire Bluegrass Band, and No Spare Parts. Looks like lots of old time traditional music by some really good veteran bands. For a flyer click here 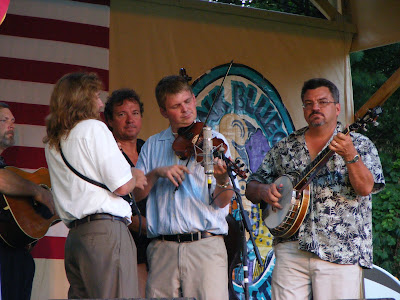 SPBGMA's 2008 "Entertaining Group of the Year" award, the Nothin Fancy Band plays lots of original material written by Mike Andes, lead singer and mandolinist. Fine musicians and entertainers, this band is very confident on stage and loves to clown around and kibbitz with the audience. It's not unusual for Mike Andes to come down into the audience for some shake and howdy at the close of the set. 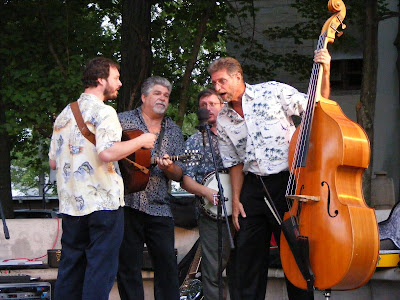 The Blackstone Valley Bluegrass Band offers two, three and four part harmony, supergood picking and original as well as covers of early country and traditional bluegrass. Ten years with the same band roster has made for tight instrumentals and close harmony. 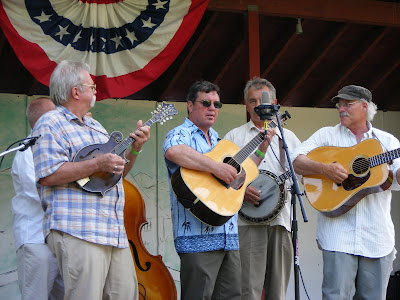 Crabgrass is a group of musicians who trade off lead vocals easily and do some fine picking to boot. They do early traditional bluegrass and newer material as well. 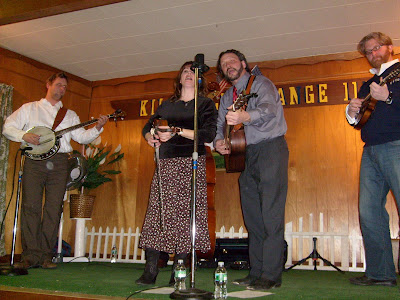 Dan Helman and Marking time sing and play early country, gospel and traditional bluegrass. This is a high energy band that does everything with great enthusiasm and they sound really good.
Posted by Jack Holland at 7:44 PM No comments: