Robin Warren's face breaks into a smile the minute she begins playing, that's how the music affects her. As she plays she looks into the faces of the admiring fans and returns their smiles. She connects immediately with her audience. She plays brilliantly, each note sharp and crisp, it's apparent that she's done this before. In fact she has performed more than 700 concerts in the ten or more years since forming Spirit Fiddle. This night she is playing Canadian and Irish jigs and waltzes. Listening to this lively music one can picture a barndance on a saturday night somewhere on Cape Breton, NS where champion fiddlers are born and nurtured. Robin would fit right in there, she has won numerous awards for her fiddling (three time winner of "Fiddler of the Festival" title) at the Fiddler's Grove in North Carolina. Robin is accompanied by the masterful playing of Brian Clancey on rhythm guitar. Tonight they're happily entertaining a full house at a Grange in Killingly, CT., the audience is obviously enjoying every minute of it. Robin and Brian work well together, often trading barbs with each other to the delight of the audience. Their playing is flawless, and the tunes are at times happy and energetic and then somber and melancholy as in their version of the "Ashokan Farewell", the theme tune from Robert Burns Civil War film seen on many PBS stations. They will be invited to return I'm sure. To visit Spirit Fiddle's site click here 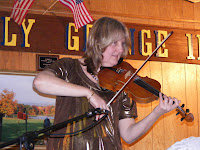 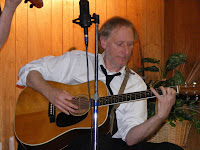 Posted by Jack Holland at 11:32 AM No comments:

Audie Blaylock and Redline performed on Saturday and Sunday to a full house. The talent in this band is incredible and when you consider that other than Audie the rest of the band, Rodney Worley (mandolin), Matt Wallace (bass), Evan Ward (banjo) and Patrick McAvinue (fiddle) are teens or barely out of their teens. 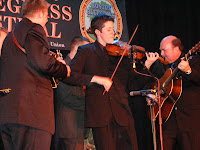 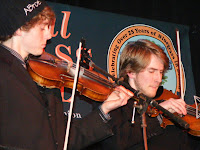 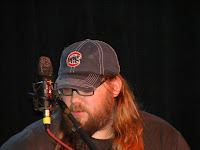 Chris Stapleton of the Steeldrivers. Deep whiskey voice with an attitude, gotta love it. The Steeldrivers lived up to their reputation, hard driving , great timing and right on harmony. The audience loved their set and showed it by their applause. The Abrams Brothers were a huge hit also, they received a standing ovation at the finish of their set and they were surrounded by fans for at least an hour out at the CD sales table.
Posted by Jack Holland at 3:05 PM 1 comment: 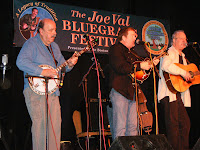 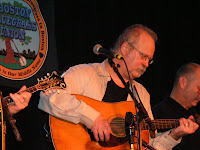 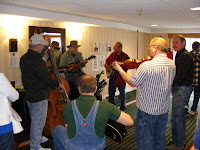 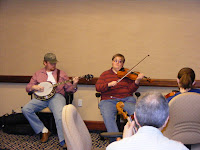 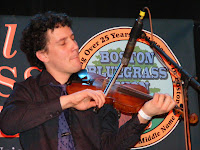 Another fantastic festival put on by the BBU this last weekend in Framingham, Mass. It had everything a bluegrasser needs, 22 national touring bands, 20 or more regional bands, 40 plus workshops, a kids academy, probably a dozen instrument and related gear vendors and as iceing on the cake, jammers, everywhere and anywhere at anytime. 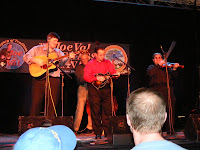 Every band seemed to be energized by the
terrific audience on hand, these folks knew how to let the musicians know how much they were appreciated. There were many standing ovations accorded, and each bands table was flooded by fans wanting to say howdy and buy CD's and in general, show them how much they loved the performance. And the excitement spread over to the showcase area where regional bands showed off their stuff to great applause. This is great exposure for these bands as there were many promoters in attendance.

Posted by Jack Holland at 12:37 PM No comments: 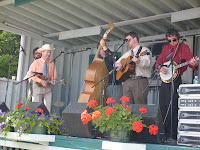 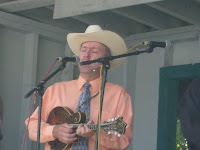 A weary David Davis performs at a festival after driving all night from a gig in Tennessee. He and the band barely had time to unpack their gear from the van before jumping on stage and giving an energetic performance of traditional bluegrass sung as only David can do it. It's a wonder that any band can perform as well as they do while going without sleep, food, showers and enduring long night drives in unfamiliar territory. But they do it and we love them for it. Most of us in the northeast would never get to see the great southern bands were it not for their tenacity and desire to perform and willingness to put up with nasty conditions. David and the Warrior River Boys play such solid traditional bluegrass with such ease and confidence you could imagine them being with the likes of Monroe, Flatt and Scruggs, The Osborne Brothers, Stanley and the other early bluegrass pioneers. On the mark timing and great phrasing is the hallmark of this band. It's a joy to hear them whether live or on CD the music is just done right.

David Davis and the WRB's schedule of appearences can be found here.
I'll be heading up to the Joe Val Festival in Framingham, Mass. on thursday. I'll have reviews and photos of the many events, workshops and jams that take place at the three day event. I'll post sometime after the 18th of February.


Posted by Jack Holland at 6:30 PM No comments: 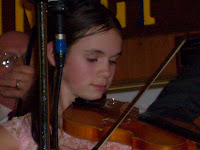 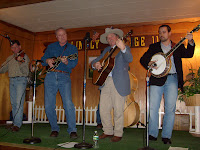 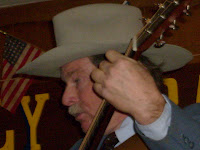 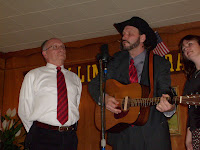 More photos of Dan Helman and Marking Time and Nick Anderson and Shady Creek taken at the Killingly Grange Bluegrass Concert January 26th. See the post below for a review of the concert. 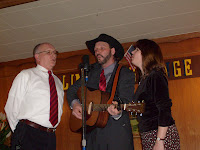 Posted by Jack Holland at 6:47 PM No comments:

Bluegrass at the Grange 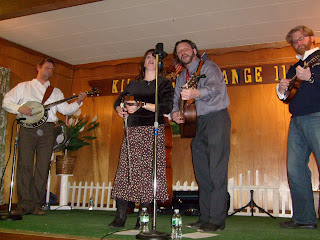 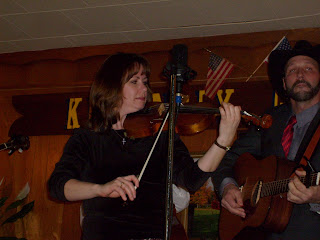 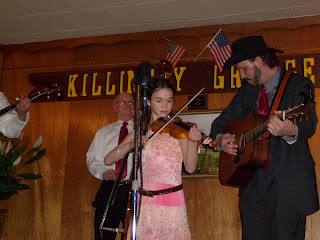 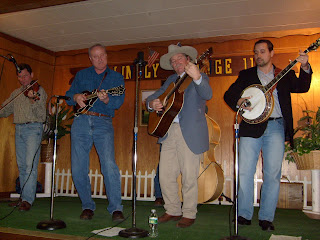 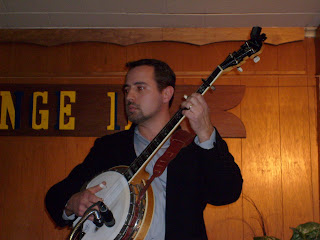 Hot chili, cornbread, and hot bluegrass are served up on the third Saturday of the month at the Killingly Grange in Connecticut. Two bands are usually featured each month. On this occasion, the house band, "Nick Anderson and Shady Creek", followed the guest band named, "Dan Helman and Marking Time." I’ll talk about Dan first.
This band hails from Massachusetts with members from different parts of the state, this must make rehearsing a difficult chore, but it didn’t hurt their performance one bit. They’re all fine musicians. The lead singers are Dan (guitar) and his girlfriend Mary Ann Donzes (fiddle) capably switching roles at lead and harmony. They play a blend of bluegrass and early country with some gospel thrown in. They have good stage presence and are loose enough to be able to tease each other much like Johnny Cash and his wife June Carter Cash did in their concerts. I think the audience really enjoyed that facet of their performance. The sidemen, James Butrym on mando, Peter Fein on banjo, and the famous Dave Helman (producer of the " Country Corner Concerts " series in South Hadley, Mass.) on bass contribute greatly to the success of this band.
We were afforded a treat when Dan invited his young daughter up on stage to do a few songs accompanying herself on a fiddle. She dressed for the part in a pretty cowgirl outfit and did a fine job. Imagine how nervous she must have been in front of a full house.
Dan and his band Marking Time will be showcased at the upcoming Joe Val Festival in Framingham, Massachusetts. February 15 to 17.
The house band is local favorite, "Nick Anderson and Shady Creek." Anderson’s band has undergone a change recently which I think has ratcheted it up considerably. The newcomer to the band, Monty McClanahan has an impressive bio consisting of songwriting and singing and his harmony, sung over the melody line of Anderson brings a whole new sound to the band. This new sound I think is the best ever for Shady Creek and will open up new opportunities for them I’m sure. A large part of this sound comes from the brilliant banjo picking of Marc Schleicher who broke loose with some terrifically fast, rhythmically on the mark solos during the set. Also superb was the fiddleing by Chris Heinzmann and the always solid base playing by Roger Diebel.
This was an exciting night of bluegrass for me and the full house in attendance.
Posted by Jack Holland at 6:45 PM No comments: