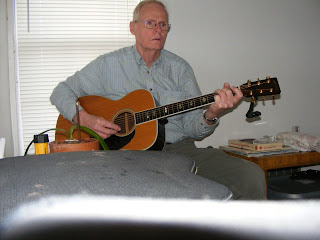 I really love bluegrass music, I think I may be obsessed with it. I think about it most of the day. I read about it, write about it, and whenever I have a spare moment there's a guitar in my hands. I even take a guitar to work so that I can play during my lunch break. I've been into it since 1985 but it seems it's more consuming now than ever before. Over the years I've developed a repertoire of probably two dozen songs/tunes that I seem to repeat over and over, much to the chagrin of my wife Meg. In fact she said to me just today "if you could sing and play like Eric or Leigh Gibson I'd say why don't you play for me." I responded "oh," she said, " but you don't, so take a break." So I figured, maybe she's tired of the same old tunes, maybe if I learn some new stuff she'll come round. So I jumped on the internet and searched for bluegrass music. I found one publication that sounded interesting. It was titled "Parking Lot Picker's Songbook," put together by Dix Bruce. He's someone I'm familiar with seeing how I learned to play from one of his books some years ago, It was bluegrass/ old time music, but I can't remember the title. Well anyway the new book has 200 of the most popular tunes played by grassers. Many of the tunes I have heard and liked but never got around to learning the music or the lyrics so this should be fun for me. I'm hoping Meg will like the new sounds and encourage me to play on for hours, oh what bliss that would be. One of the tunes in the book I particulary like is "Katy Dear," a traditional song which tells the story of two young lovers who weren't allowed to marry so they ended their lives with a silver dagger, some real cheery stuff but a scenario that's been repeated throughout history. There are many more that tell stories of hard times, sad times, loss of homeplace and feats of daring and strength. They all must have some truth in them and if we had lived during the period when they were penned we could quickly relate. I'm sure I will never learn to play or sing all of these tunes but I will have a grand time trying. "Without music, life would be a mistake." Freidrich Nietzsche. 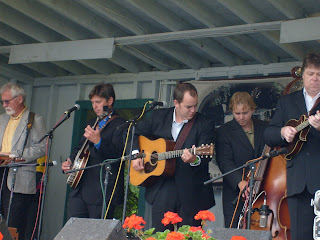 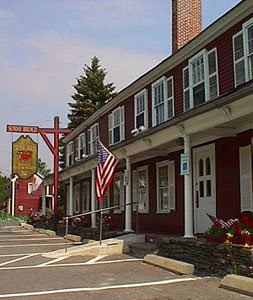 Paul Revere may have stopped here on his midnite ride to warn the colonists of the impending attack by the British Army, or he may not have. Lots of legends surround this pre-revolutionary Inn located in Shirley, Mass. But a few things I'm sure of, the food is good, the ambience is wonderful and the Gibson Brothers will have their CD release party there. The name of the place is the "Bull Run Restaurant," the name of the album is "Iron and Diamonds," and the reviews of the album are sensational.

Leigh and Eric have written 7 new songs for this project. I've heard two of the cuts, the title cut, Iron and Diamonds, and Pickers Blues, both are solid enjoyable pieces, well done as usual. I'm eager to hear the entire album and am hoping they sing and play most if not all the cuts that night, which by the way is April 4th, friday evening.
Posted by Jack Holland at 9:20 PM No comments: 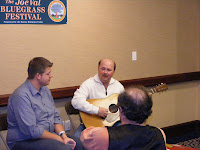 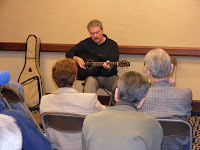 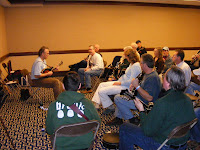 Workshops are a huge hit at most festivals these days, even the smaller venues are holding them. As anyone who attempts to attend a workshop can tell you, "ya betta git there early", yes that's right, the line is down the hall and around the corner if it's indoors, and twenty deep if outdoors. And why not? Who wouldn't want to get tips from the likes of Adam Steffey, Michael Cleveland, Leigh and Eric Gibson, Audie Blaylock and other top touring musicians as well as gifted teachers like August Watters, Rich Stillman and others. I found it interesting to see people of all ages, male and female, eager to learn our music. This tells me that the odds are good that this music will carry on and hopefully grow to where more musicians will be able to make their living doing what they love.
Posted by Jack Holland at 7:19 PM No comments: