I always enjoy playing and singing the tune "Wreck of the Old 97". One day it came to me that maybe it’s not such a good thing to get such a kick out of singing a song that represents a real life tragedy. I thought I’d better do some research and find out what really happened on that day in Virginia so long ago.

It turns out Old 97 was a mail train that had a reputation for never being late. On September 27, 1903 it was bound for Spencer, North Carolina from Monroe, Virginia. At the throttle was engineer Joseph A. (Steve) Broadey, 55, of Saltsville,Virginia. Broadey was a 20 year veteran of Southern Railroad and quite familiar with this route having spent most of his career in this division. The engine (no.1102) was pulling four postal cars loaded with mail and postal freight and one express car with baggage that included six crates of canary birds that were probably headed to some coal mine to be used for safety purposes. By the way, all the canaries survived the wreck.

The wreck of the 97 occurred on Stillhouse trestle, a 75 feet high 500 feet long wood structure that crossed over the Dan river near Danville Virginia. As the train sped downhill into a very sharp curve approaching the trestle, engineer Broadey sensed his speed was to high and slammed the engine into reverse in an attempt to lock the wheels and slow the train. The engine which had traveled 50 feet onto the trestle suddenly lurched and then jumped the track slipping over the edge of the ravine and tumbling down to the rocky bottom. The cars were cut to pieces by the large boulders in the shallow stream. Of the sixteen people aboard, nine were killed instantly. Engineer Broadey and the two fireman had their skin and hair torn from their bodies from the force of the steam engine. The remaining seven crewmen were severely injured and rushed to the hospital. As word of the wreck spread, thousands of people rushed to the scene. Many of the women who drove up from Danville fainted after seeing the carnage.

Railroad officials placed the blame for the wreck solely on engineer Broadey. Saying he was traveling to fast and ignored the warning signs along the track. But some folks said he was pressured by railroad officials to get that train into Spencer on time. The railroad had a very profitable contract with the Postal Service that included penalties for every minute they were late in the delivery of the mail.

The day after the wreck, Fred Jackson Lewey and Charles Noell wrote a ballad about the disaster. It was later altered a bit and recorded by Henry Witter and then in 1924 Vernon Dalhart released his version on Victor Records. It went on to become the first million seller in Country Music history. Many artists have recorded it including: Flatt and Scruggs, Johnny Cash, Hank Snow and many others. My particular favorite is the Hank Snow version. Several people later claimed to have written the ballad, causing the first major copyright lawsuit in US history.

At any rate, now when I play the "Wreck of the Old 97" it will have a whole new meaning for me.
Posted by Jack Holland at 6:19 PM No comments: 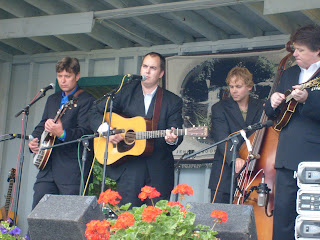 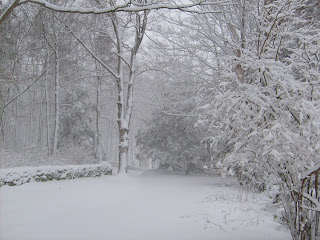 The weather forecast calls for a foot and a half of snow overnight. That means tomorrow will be spent shoveling snow in between playing the guitar. The guitar part I look forward to. I’ll probably sing (some would say screech or wail) some of the old tunes like "Dark Hollow," "Shackles and Chains," and "The Prisoners Song." Mac Wiseman does a great job singing these tunes which is probably the reason I like them. Mac is one of the greats of bluegrass, I think he could have a hit on any tune he sings.
I don’t know why I like so many of the sad tunes. I’m a relatively happy guy. Now who would think that singing a song about a lost love, or a train wreck, or never seeing home again would make you feel good. But it does. Singing bluegrass is like scratching your back, it will not make you healthier, richer or smarter but, as you are probably aware it sure feels good.
Back in the days of the mountain string bands singing was not important, the emphasis was the instrumentation with the fiddle and the banjo especially prominent. When hillbilly and then bluegrass music came on the scene the singing became much more important. And of course today most every jam session has a wealth of singers as well as some very talented pickers.
I don’t know where I’m going with this so let me tell you about the Gibson Brothers new release. It’s scheduled to available on April 8th and it’s titled "Irons and Diamonds". I’ve heard a couple of cuts including the title cut and it leaves you wanting more. The album has seven new songs written by the Gibsons and covers of Roger Miller, Steve Earle, Tom Petty, Julie Miller and Bill Carlisle. This band just gets better and better, the harmony is wonderful and the instrumentation is superb. Junior Barber and Erin Gibson LaClair contribute to this album as well. This is one I’ve got to have.
Posted by Jack Holland at 1:06 PM 2 comments: 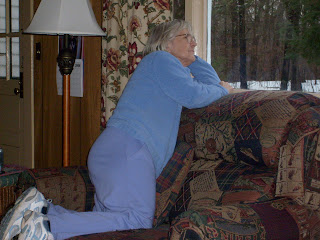 Disheartened, Meg is leaning on the back of the couch watching the woodpeckers devour the suet. The snow has no effect on them but it put an end to our plans for the day. I’m sure she’s hoping for an early spring and the beginning of the Festival season.
A glance at the calendar tells me there’s only 40 days (Feb.15) till the start of the Joe Val Festival in Framingham, Mass., a three-day event that features some of the finest national bands around as well as several popular regional groups. Because of the efforts of BBU president Gerry Katz, vice president Stan Zdonik and their dedicated volunteers the Joe Val is one of the premier festivals in the United States. In 2006 the International Bluegrass Music Association awarded the Joe Val with the Bluegrass Event of The Year trophy.
The bands slated to appear in 2008 are: The Seldom Scene, Michael Cleveland and the Flame Keeper, Blue Highway, Continental Divide, Dailey and Vincent, Steel Driver, Alicia Nugent, Steep Canyon Rangers, The Frank Wakefield Band, and many more. In addition, downstairs in the vendors’ area several local bands will be showcased on the vendor stage. There’s also the possibility of seeing one of the headliners popping in for an impromptu performance on the more intimate corner stage. I know last year the Gibson Brothers did three of four songs in between sets on the main stage.
What adds to the excitement for me is the number of workshops where you can sharpen your skills in harmony singing, song writing, or playing the guitar, banjo, fiddle, bass, and mandolin and this year Stacy Philips will be doing a Master’s workshop for the dobro. If you need more to do, you can visit with the many vendors downstairs who will be displaying the finest of instruments and accessories.
Now if you’re bringing children and they’re into Bluegrass your in luck. Just get them over to the Bluegrass Academy for Kids. There are some good folks who are dedicated to helping young people learn and improve their skills with bluegrass instruments, singing and playing in a band setting.
Of course jamming goes on day and night everywhere, in the hallways, at the elevator doors, in the picking rooms at the check in desk and who knows where else.
All in all this is a wonderful and relaxing break from the cold and snowy winter. I hope to see many old friends there and hope you do too.
Posted by Jack Holland at 8:56 PM No comments: