The Killingly, CT. Grange kicked off its new season last Saturday with two fine area bands, Pine Creek and host band Shady Creek. Pine Creek, features Nanette Addesso on lead vocals and fiddle, Joe Mellet, who shares lead vocal, on mandolin, Mike Volatile on bass and vocals, Fred Etheridge on lead guitar and Jim Beaver on banjo and harmony vocals. Jim Beaver is also the knowledgeable cohost of the Bluegrass Cafe which airs on WHUS 91.7 at the University of Connecticut. This band proved to be quite talented and I especially enjoyed the choice of music, tunes like "Jenny Mule","Midnite Train" and "Waves of the Sea" played at top speed with good timing and rhythm. Harmony was tight and right, and Nanette and Joe provided fine vocals. Nanette throws her head back and launches some strong, emotional versions of songs about lost love and homeplace, Joe sings the lyrics with passion. I'll be sure to look for this band down the road. 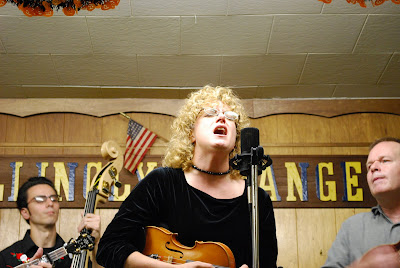 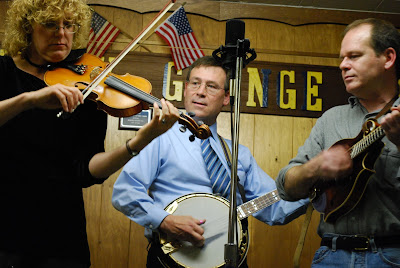 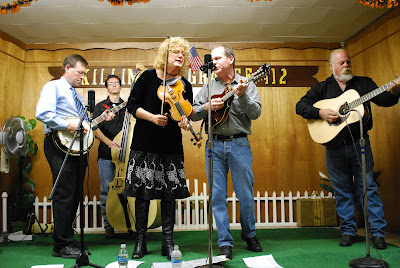 The Pine Creek Band with Fred Etheridge on guitar

The Shady Creek Band is the host band of the series and always give a fine performance. Lead singer Nick Anderson combines with mandolin player Monty McLanahan to sing traditional and gospel tunes such as "Rose of Kentucky", "Another Night", "Lonesome Road Blues" and many more of the good old songs. Their special guest of the night was Danny Menzone a highly talented banjo player, songwriter and former member of the "Traver Hollow" band that toured the national and international bluegrass circuit for over twenty years. Dan recently put together an album titled "Menzone Drive", it has eight original tunes along with covers of Flatt and Scruggs and Peggy Harvey, former bandmate at "Traver Hollow". The album has an impressive lineup of musicians, "Rickie Simpkins" on fiddle and mando, "Wyatt Rice" on guitar, "Ronnie Simpkins" on bass and "Roger Williams" on dobro. This album is a good listen, its melodies grab you right from the start and Danny is one of the best at playing both straight ahead bluegrass and more edgy material. All in all I'd say the "Grange Concert Series" got off to a wonderful start. 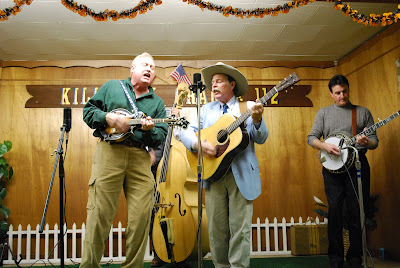 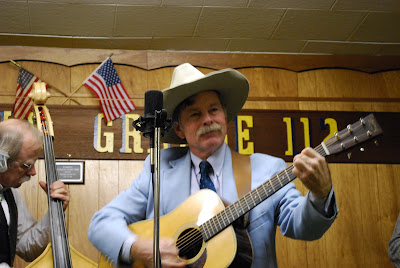 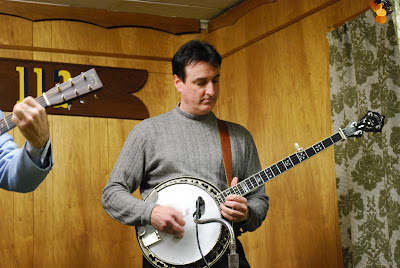 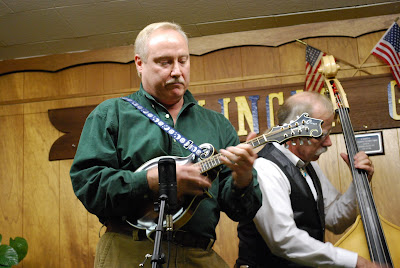 Posted by Jack Holland at 9:34 PM No comments:

October 12 was a perfect day for a ride in the country, shirtsleeve temperatures,clear blue sky and magnificent fall colors and then top it off with wonderful bluegrass music. The Canterbury, CT. Historical Society must be doing something right, two of its major fundraising events have had picture perfect weather and the people turned out in great numbers. That was the case Sunday for the Bear Minimum Band and Gibson Brothers concert. 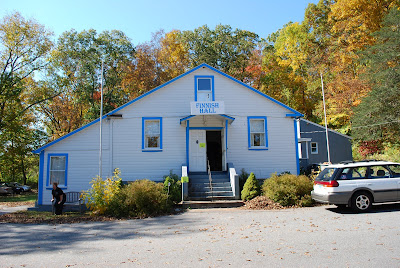 The "Bear Minimum" band opened the afternoon of music with their blend of early country and traditional bluegrass. Dave Shaw, a member of the "Bear Bridge Band" has teamed up with Dave Orlomoski, who is a member of both the "Bristol Boys" and the "Bear Bridge" band to form the "Brother Style" duet offering up tight harmonies and fine picking. Their music was that of the Louvin Brothers, Hank Snow, Jimmy Rogers and others of that era. The band was well received, indeed, they got an ovation just for walking down the aisle to the stage and a request for an encore. 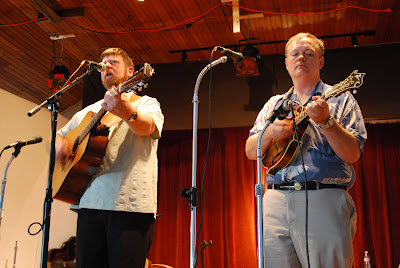 The Gibson Brothers took the stage next and thrilled the sold out house with tunes from their Number 1 album "Iron And Diamonds". Tunes like "Pickers Blues," "Cabin Down Below" and the title cut "Iron And Diamonds," all three are on the Bluegrass Unlimited "Top 30 Songs" list. The band was at the top of their game with every tune performed with passion and urgency to a wildly appreciative audience. Both Eric and Leigh have the talent and skill to be able to get inside a song and deliver its message with emotion and feeling. Add to that a band that can deliver aggressive rhythm and thrilling solos and you've got yourself an afternoon of music you can rave about for hours. The DJ at WHUS, 91.7 said his phone was ringing nonstop with people who wanted to let him know about the fabulous show they had just seen.
Thanks to Amy Orlomoski and the Canterbury, CT Historical Society for such a well run event. 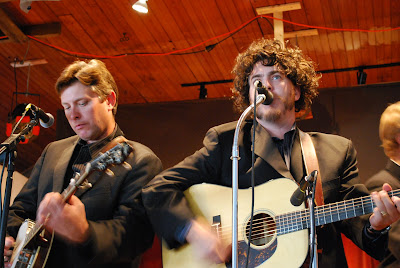 As you can see, Leigh Gibson's recent hair transplant surgery was a huge success. 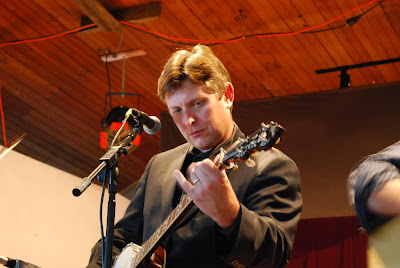 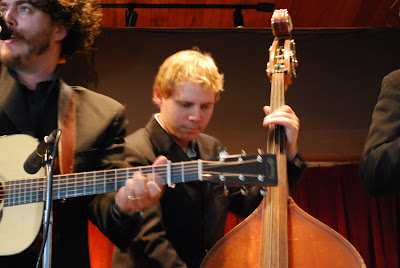 Mike, as always was excellent at providing the steady bluegrass beat and some splendid solo work 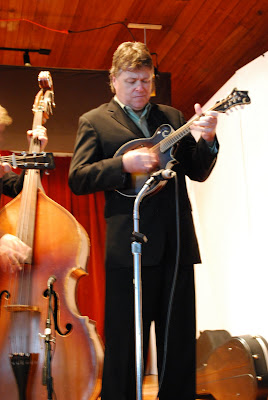 Rick rendered flawless solos, uncluttered, clean and delivered with the melody in mind 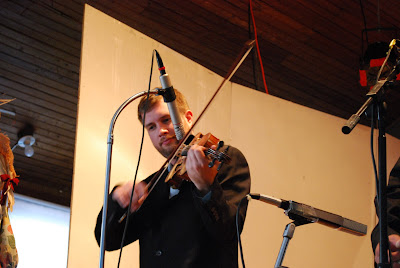 Clayton was on fire, up on his toes and feeling every note played. Its now obvious, the curls are gone, Yep, it was a wig.
Posted by Jack Holland at 1:10 PM No comments:

The producers of the popular Jenny Brook Family Bluegrass Festival have announced that due to circumstances beyond their control they have to move the festival from Weston VT. to the Tunbridge Fairgrounds in Tunbridge, VT. for the 2009 festival season. The new home will be an improvement, I think, because it will have free showers and flush toilets and a building to house the music should the weather turn sour as it sometimes does at most festivals. At any rate I'm happy to see it continue as it's one of our favorites. The Jenny Brook website has photos of the grounds and buildings. Click here to visit their website 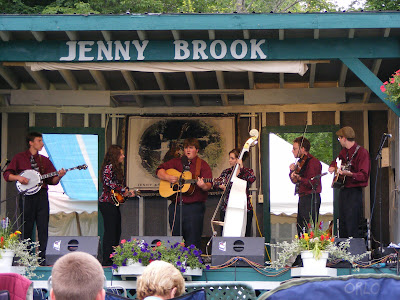 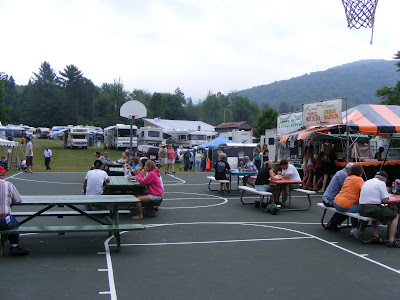 The Food and Vendor area 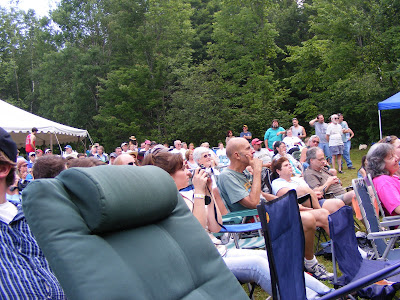 Waiting for the Music

Posted by Jack Holland at 3:01 PM No comments:

With their album "Irons And Diamonds" sitting atop the Bluegrass Unlimited's Top 15 Albums chart and three of their songs on the Top 30 Songs List The Gibson Brothers are riding high. They've had a busy schedule this year with bookings all over the country and happily they'll be stopping by the Finnish Hall in Canterbury CT on Sunday the 12th of October. The "Bear Minimum Band," Dave Shaw and Dave Orlomoski, will open at 2:30 p.m. and the Gibsons will take the stage at 3:30 in the afternoon. I'm told the tickets are going fast, they can be purchased at the door. For more information click here 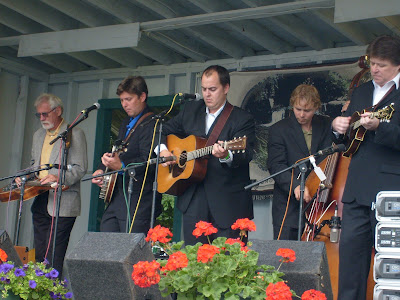 Posted by Jack Holland at 8:58 AM No comments: