Even though the skies were cloudy Saturday the Preston City, CT. "ScareCrow Festival" was wall to wall people and the parking lots were filled when I arrived, I found a spot about 1/4 mile from the gate and made it to the music tent in time to catch the opening song by "The John Stey and Sam Tidwell Band." The band was made up of seasoned veterans of the Bluegrass scene: John Stey singing lead and playing rhythm guitar, Sam Tidwell on the banjo and harmony vocals, Howie Tarnower playing mandolin and singing lead and harmony and Matt Bolles on bass and lead vocals as well as harmony. The guys played solid traditional grass with some fine solo's from Howie and Sam, they were tight and right and I hope the mostly non-Bluegrass audience was impressed by our music, judging from the smiles and foot stomping I'm guessing they were. 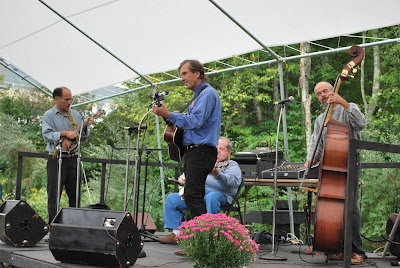 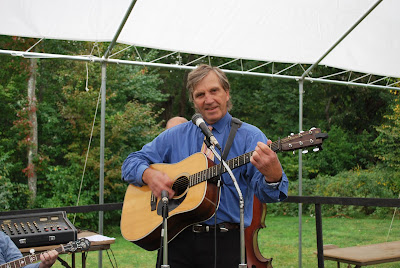 John has put together several bands both in Michigan and New England and now plays with the "Boston City Limits" group. 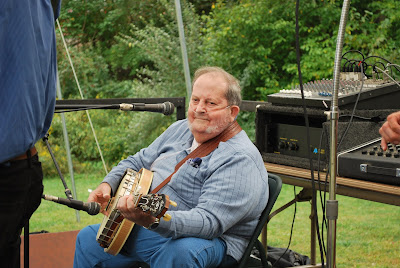 Both Sam and his wife Edie are members of Bluegrass music's "First Generation," a group of 232 artists who contributed to the establishment and growth of this unique music. The International Bluegrass Music Museum's "Video Oral Project" which seeks to interview and film the members of this elite group has already completed Sam and Edie's interview and when the project is finished it will be available to members of the IBMM at their website and at some point to the general public. 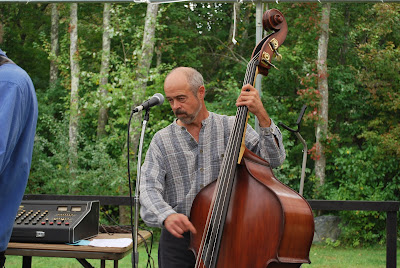 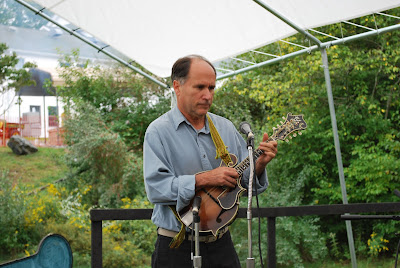 Howie is a well known multi-instrumentalist in the northeast, he's performed on a bunch of recording projects and with other bands in the region, he fronts the "Boston City Limits" band and has been an instructor with the Joe Val Kid's Academy and other organisations. 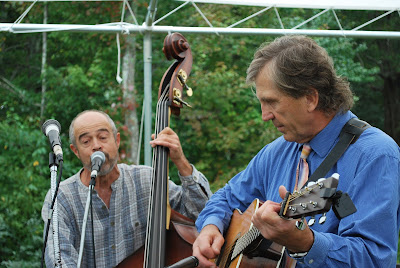 Posted by Jack Holland at 9:08 PM No comments:

The award-winning Lonesome River Band is proud to announce a new band member.  “We are excited about the addition of Barry Reed to the Lonesome River Band.  He is a great acoustic bass player and singer and adds greatly to the LRB sound,” says band leader and this year’s IBMA Banjo Performer of the years nominee, Sammy Shelor.
Barry Reed, from Seymour, Tennessee, previously toured with Michael Cleveland & Flamekeeper before taking some time off to start his family.  “I’m really exited about joining LRB.  These guys are great to work with and it has been a lot of fun already,” said Barry.
The Lonesome River Band has numerous upcoming performances in the next few weeks including: September 17 at the Poppy Mountain Bluegrass Festival (Morehead, KY); Dumplin Valley Bluegrass Festival (Kodak, TN); Watermelon Park Fest (Berryville, VA); The Station Inn (Nashville, TN); IBMA Fan Fest (Nashville, TN); and Paluxy River Bluegrass Festival (Glen Rose, TX).

The band is celebrating a their brand new album, “STILL LEARNING” (Rural Rhythm Records) that is #1 on this month’s Bluegrass Music Profiles (BMP) Top 10 National Bluegrass CDs chart, plus made its debut this month on the Bluegrass Unlimited Magazine’s Top 15 Albums. The new single, “Record Time Machine” appears at #21 on the BMP Top 30 Hot Singles and moves up to #26 (from its debut last month) on the BU Top 30 Songs.
“STILL LEARNING” was just featured on CMT.com’s “Top 10 Indie Albums Worth a Listen,” reviewed in Country Weekly Magazine and numerous other publications.   LRB recently recorded a live performance and interview in Lousville, Kentucky with radio host, Bob Mitchell that will air on Bluegrass International in October.
The Lonesome River Band can also be heard on the upcoming new album, "RURAL RHYTHM ALL-STAR JAM - LIVE AT GRAVES MOUNTAIN" recorded in June at the Graves Mountain Festival of Music in Syria, Virginia celebrating Rural Rhythm Records 55th Anniversary. The album releases October 24, 2010.
For more information on the LRB please visit lease visit www.lonesomeriverband.com. For more information on these albums, please visit Rural Rhythm Records. Booking services for LRB is provided by Roe Entertainment with Media by Hope River Entertainment.
###
Photo Credit for above LRB stage shot provided by: Rhonda Maxey
BOOKING CONTACT FOR LRB
Roe Entertainment, Jim Roe
877-688-5885
Email

Posted by Jack Holland at 5:09 PM No comments: