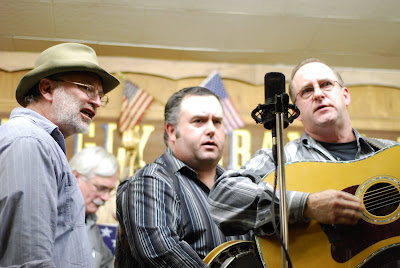 The Killingly Grange Concert Series continued its monthly presentations of Bluegrass music featuring the western Maine band, "The Hemingway Brothers" and the house band "Shady Creek" on Saturday night. This is a special venue in that it brings live bluegrass to people in an area of CT. that otherwise would go without. Many of the faces I saw there I do not see at other venues in New England, but it was obvious by their enthusiasm, they love the music. Indeed, It felt to me like a church supper, lots of socialization and good inexpensive food followed by wonderful entertainment. The "Hemingway Brothers," Kip and Dale, are joined by John Sparrow on bass, Bruce Hobart, fiddle and harmony vocals, and 16 year old Hunter Webber on banjo and guitar. Covers of the Stanley Bros., Flatt and Scruggs, Jimmy Martin, and other first generation bands are the meat of this group. The vocals are heartfelt and delivered with conviction, the musicianship is good and clean, they put together a fine set. 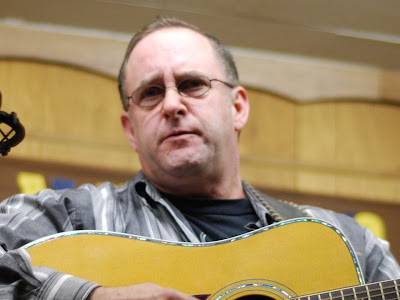 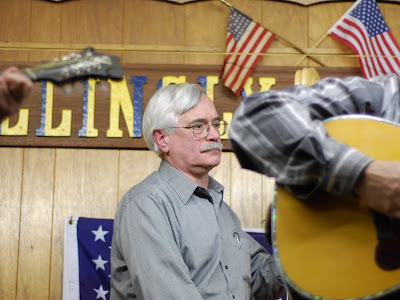 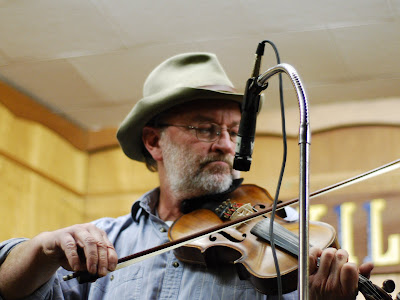 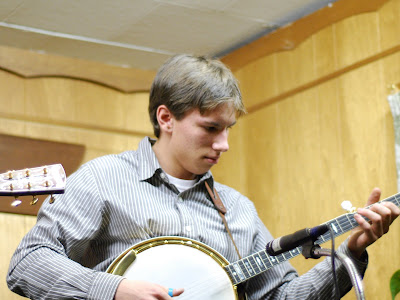 Hunter is a talented player, and he's only been playing for four years. In fact, in order to get in the time he felt needed to progress rapidly he would sneak out of the house after his parents went to sleep, slide into the family vehicle and play all night. 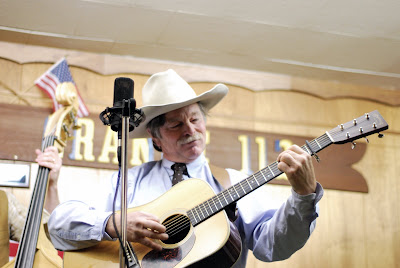 "Nick Anderson and the Shady Creek Band" are a mainstay at the Grange, having put on these concerts for years, Nick always brings in good bands to fill out the bill. His music is traditional as well and he possesses a powerful voice perfectly suited for bluegrass. His mandolinist, Monty McLanahan can sing fine lead vocals as well and is a songwriter of note with his own project, "The Road Less Traveled," featuring eight original songs already in circulation. William Trickett, another young banjo player who at 14 can play a mighty fine banjo and dobro sat in with the band and was well received. Roger Diebel, as always put a solid bass groove. At the close of the show both bands joined together on stage and played for another hour and would have continued all night but the building had to be closed by midnite. 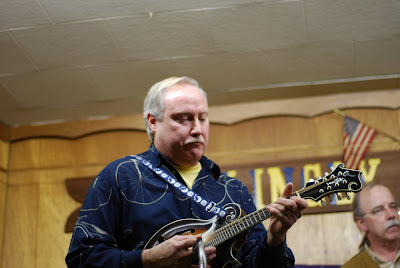 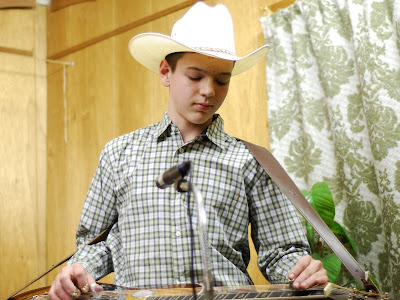 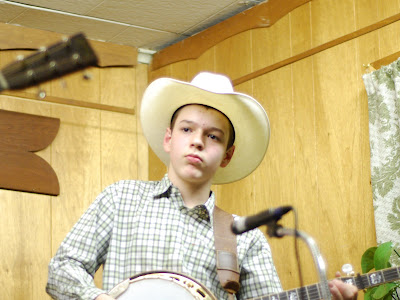 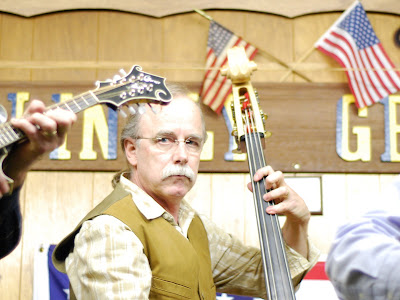 Posted by Jack Holland at 10:45 AM No comments: 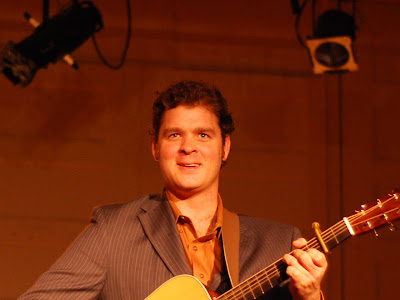 Seeing how it was a Thursday night I was surprised to see a large crowd on hand at the East Hartford Community Cultural Center, but then again the "Steep Canyon Rangers" are a hot band. It was obvious by the loud applause even before the band was announced that the audience knew what they were going to get, high energy, tight and right instrumentation, perfect harmony and stellar vocals. The band sensed right off that this was going to be a good audience and performed accordingly, tearing up the place, giving 100 percent of their talent and effort. They were rewarded with ear splitting applause and several encores. They offered up much of their own material written by banjoist Graham Sharp with contributions by mandolinist Mike Guggino. Woody Platt, the lead vocalist and guitarist delivered beautiful melodies and Mike Guggino provided the tenor. Sharp, and the fabulous fiddler, Nicky Sanders contributed fine harmony. Sanders is up there with the best fiddlers in the country, I mean he just adds so much fun to the band. Bassist Charles Humphrey was not with the band as he had to rush home to North Carolina to become a new father. He was replaced by the one and only Mike Bub who thrilled the audience and had a good time for himself as well. This was a wonderful show and thanks to Roger Moss and his volunteers at the EHCCC for bringing these top bands up to "Cold Country." Happily, I can look forward to seeing the SCR in February at the Joe Val Festival in Boston 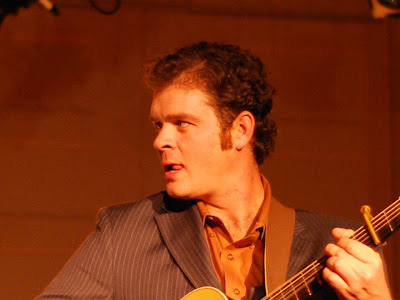 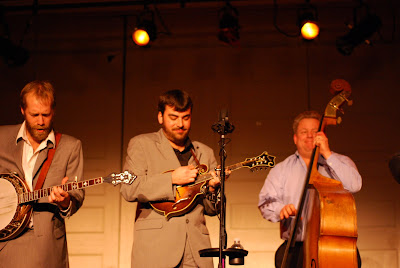 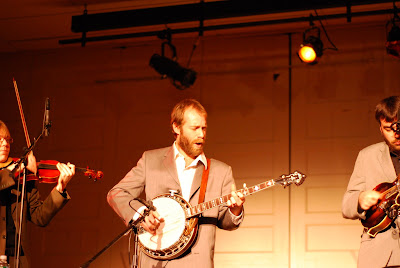 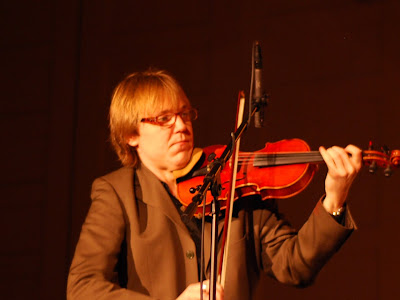 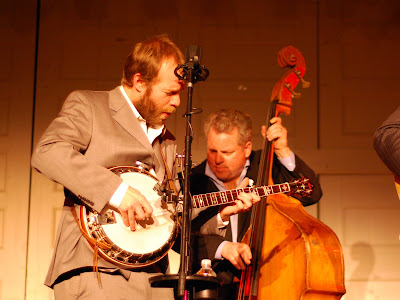 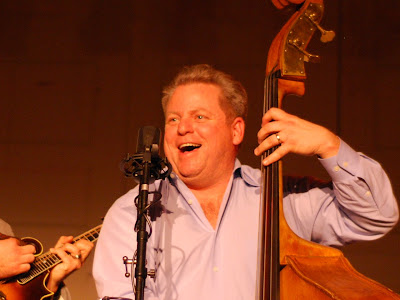 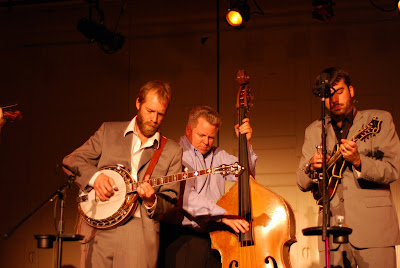 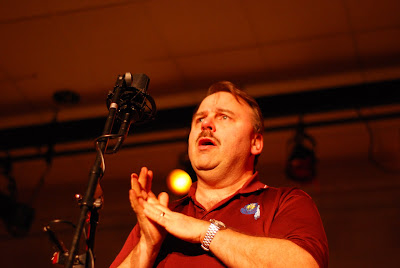 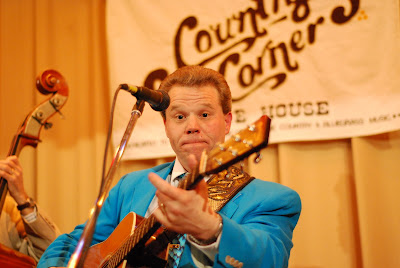 After a long cold ride it felt good to get inside the Congregational Church of South Hadley Falls, Mass., home of the CountryCornerCoffeehouse I saw a lot of familiar faces as I entered and bought a ticket. I was greeted by Dave and Rose Helman and made to feel welcome. Dave was hoping for a good turnout and by show time it looked like he got it. Jay and his band, Eastern Tradition , took the stage right on time and Jay began charming the audience with his self-deprecating humor and somewhat corny jokes. They picked and sang lots of traditional bluegrass and gospel. The lead vocals were shared by Jay and Lisa K. Howard and harmony was provided by all. I found the set very enjoyable and I particularly enjoyed Mike Munford's banjo playing, meticulous and lively. Tom Gray, of course, was wonderful on bass and Jay and Lisa did a fine job singing and playing, Jay on guitar and Lisa on mandolin. Lisa has a country voice that is sweet and Jay's vocals are smooth and confident. The band was generous with their time, performing for two and a half hours and the audience just loved it. I want to Thank Dave and Rose for what they do for bluegrass in the northeast. 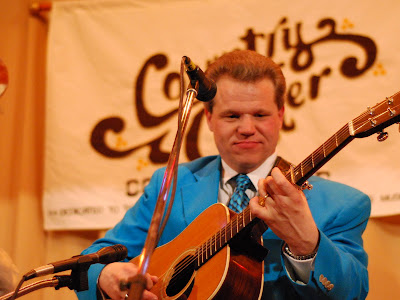 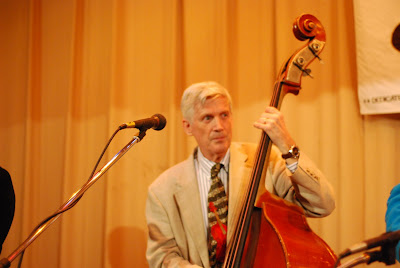 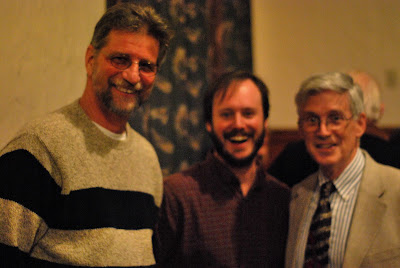 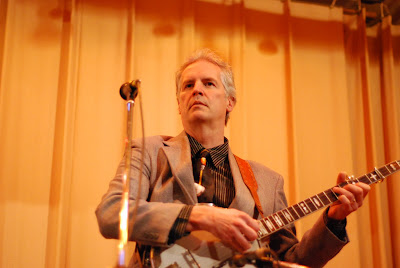 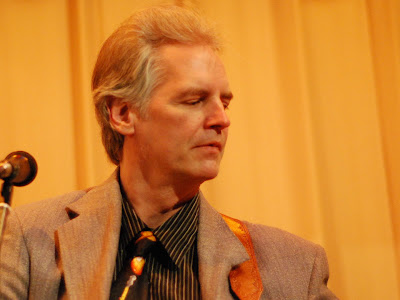 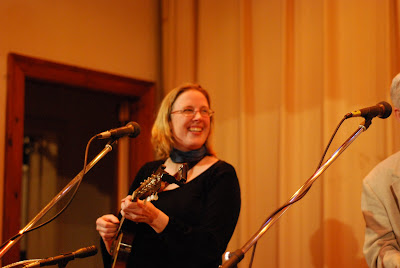 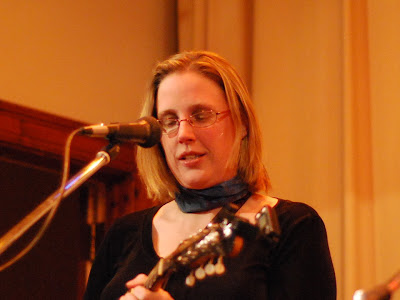 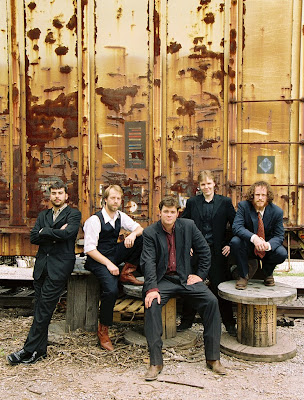 The Steep Canyon Rangers will be stopping in East Hartford CT on thursday night, the 22nd of January, to perform at the comfortable and very attractive East Hartford Community Cultural Center, show time 8pm. This band formed in college at Chapel Hill, NC and have been touring heavily ever since. In 2006 they were the IBMA's "Emerging Artists of the Year." They've produced four albums, with one, "Lovin Pretty Women" nominated for IBMA's 2008 Album of the Year. They perform mostly original material influenced by country, gospel and blues. You'll be treated to Woody Platt's rhythm guitar, tight harmonies, marvelous vocals and inspired instrumentation.
Make an effort to see this group, you'll be glad you did.
Posted by Jack Holland at 7:49 PM No comments: 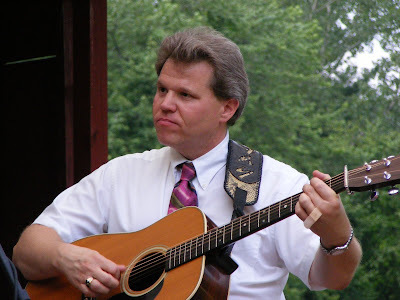 Jay Armsworthy and the Eastern Tradition band will bring their powerful brand of traditional bluegrass to the Country Corner Coffeehouse this Saturday Jan. 17, at 8 p.m. This band is known for lively traditional grass as well as original ballads and old time gospel. Jay has a smooth voice and is a fine picker, Tom Gray,a member of the IBMA Hall Of Honor and the original bassist for the super group "Seldom Scene" will be on hand as well as Marc Bolen on banjo and Lisa Kay Howard on mandolin. Come on out and support bluegrass music. The Coffeehouse is located at the Congregational Church of S. Hadley Falls, 11 N. Main St., S. Hadley, Mass. Tickets are $15.00 at the door.
Posted by Jack Holland at 10:02 AM No comments: