The "Bear Bridge Band," whose members come from Massachusetts, New Hampshire and Connecticut, paid a visit to the Killingly,CT. Grange on Saturday for a rare performance, the band hasn't been playing dates of late. They put on a great show for the nearly full house. Organized by Nick Anderson, a long time Bluegrasser, the series runs through the winter months and features Nick's band, "Shady Creek" and a different guest band for each concert. The series is always well attended sometimes filling the house. Many of the top regional New England bands can be expected to appear as well as a few local acts. A good part of the regular audience seem to be people not seen at other Bluegrass venues leading me to think they're not so much Bluegrass fans but more likely drawn to the shows for some tasty inexpensive food, good music and a night out in a friendly safe place. They sure do appreciate the talented musicians as they always applaud loudly and with enthusiasm and they keep coming back. I think promoters should take their cue from this and plan to have their event catered by local groups that already have a reputation for good food at reasonable prices and use the sales revenue for good works, this may increase ticket sales. I say this because I've been to events that feature top National Touring bands, yet draw small crowds. I wonder if they used this format instead of just snacks of candy and chips and the like, would they fill more seats. Could it be that people want to make a night of it by having hot food and sandwiches before the nights entertainment, sort of a "sit down supper," followed by the music. I can tell you that the venues that use this format have very good turnouts. It seems to work and might be worth a look. 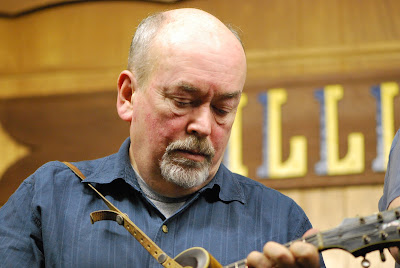 Robert Fraker heads up the Bear Bridge Band with his fine mandolin pickin and vocals. This was a rare appearance for the band as most of the members are involved in other projects. I enjoy the way Robert introduces a song with some anecdotal information on its origin and who has recorded it in the past, makes the song special when you know of its history. 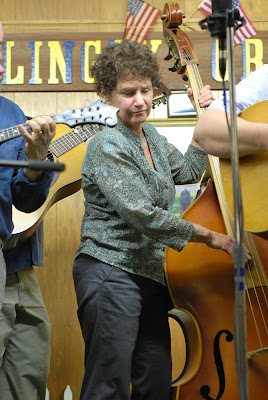 Lillian keeps the band in perfect time with her solid bass rhythm, and her bass runs will make you sit up and pay attention. As Doc Watson often remarks when hearing talented musicians, "Man, she can play the fire out of that thing." 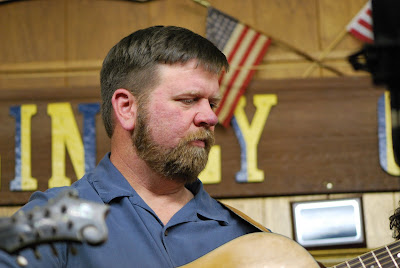 Tex is a fine lead vocalist with a smooth confident delivery. His guitar solos are always good and he too can tell interesting stories about the songs and artists he has met along the way. 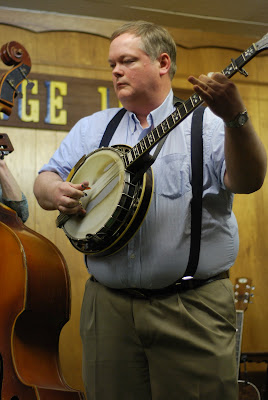 Dave Shaw was solid on the banjo and his lead vocal and harmony added to the nights performance. 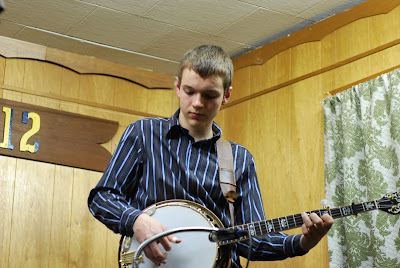 The Shady Creek Band, fronted by Nick Anderson, with Joe Giard sitting in on mandolin, Elise LaFlamme on fiddle, William Trickett on banjo and dobro, and Mark Doyle banging the bass, is always a crowd pleaser. They do so many of the early traditional songs, they really get the audience engaged and stomping their feet. Always a good evening at the Grange. Next month," Amy Gallatin and Stillwaters" with Roger Williams on dobro will fill out the bill. Come early for the fine food from the Grange kitchen. 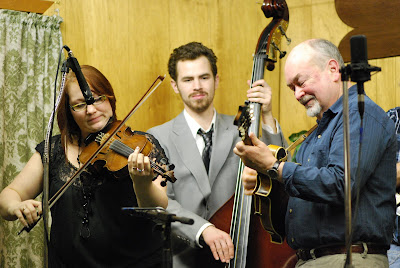 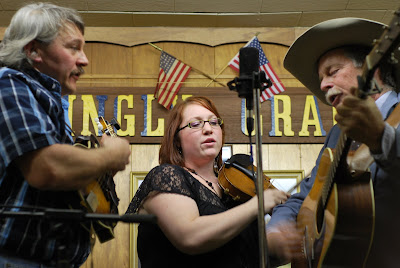